Sandwatch and sanitation on the shores of Lake Victoria
Good sanitation the key to survival of Lake Victoria
A survey by the Sandwatchers revealed that there are just two public toilets on the Kisumu beach serving more than 10,000 people and the fishermen who work and reside around the shores of Lake Victoria. “POOR sanitation among communities living around Lake Victoria poses a threat to their lives, to the existence of the lake and to the fishing industry” the Member of Parliament for Kisumu town has warned. He added that the problem was made worse by fishermen who say it is time wasting and anti-cultural to get out of their fishing boats and go to a toilet. So they have resorted to relieving themselves in the lake.
​
Kisumu is the third largest city in Kenya and is situated on the shores of Lake Victoria, with an estimated population of 500,000. Informal settlements currently hold around 50% of the population of Kisumu and the lack of any clear policy framework or effective programme for meeting the needs of the poor fishermen who live in this city has resulted in rapid expansion and overcrowding of these areas, with the majority of the residents here living in absolute poverty without access to sufficient water or sanitation. The majority of the residents defecate among the bushes or use ‘flying toilets’ (paper bags into which people defecate) and which are then thrown away many times landing in the fresh waters of Lake Victoria. The cost of digging and constructing latrines is too expensive for most, at Ksh.250 per foot. Where latrines are available they often malfunction at times of heavy rains.

We as the Sandwatchers Kenya chapter who are based at the Kisumu High School feel that we must do something about this grave situation. We attended a seminar dubbed “Eco-toilets” . Eco toilets is project being adopted by environmental conservationists and has the support of the United Nations Environmental Program (UNEP), to assist rural populations have access to sanitation facilities, rain water harvesting system; storage and treatment; bio-digesters. Recently the during the seminar our local member of parliament for Kisumu Town West, Mr. Olago Olouch defined the eco-toilets as “a comprehensive exciting and innovative hygiene pack that can save the lake”.

There is an urgent need for the construction of simple, low-cost, affordable toilets on the shores of the lake that are easy to build and maintain and are relatively free of odours and flies and do not drain into the lake. Eco-toilet concept is what we the Sandwatchers feel can work best for us. Eco-toilets deals with ABCD. That is; Architecture and construction, Behavioural change, Cleanliness and Disposal systems appropriate for sanitation (ABCD). The idea is to introduce a beautiful toilet concept that will bring inspiration to the fishermen, car washers and people around the lake to transform them into change agents who will then promote hygiene, sanitation and good health. We will in the next few months raise funds to begin construction of an eco-toilet on the shores of the Lake near our school. We need partners and friends of the Lake Victoria to join us.
By Peter Amunga, Sandwatch Kenya Chapter August 2011
Sewer lines run into it, plastic piles up on its shores and large trucks are washed in lake Victoria.  Fishermen dump waste into the lake and people bathe and wash clothes in it 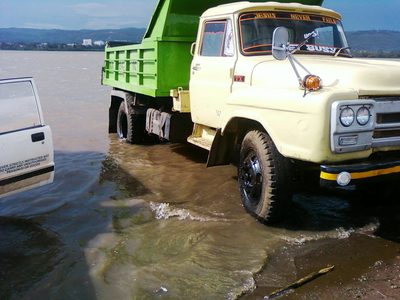 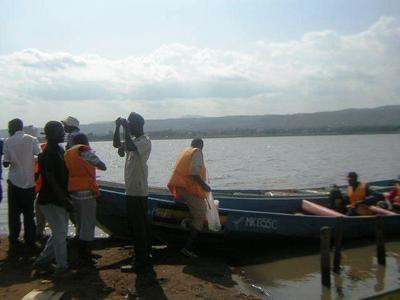 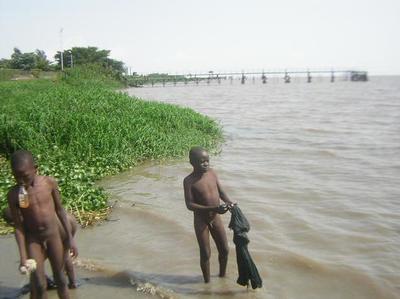 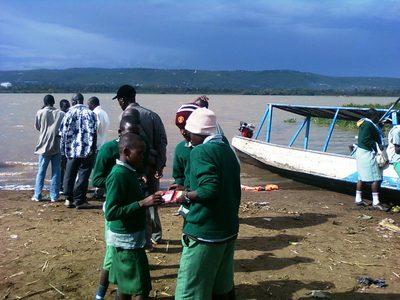 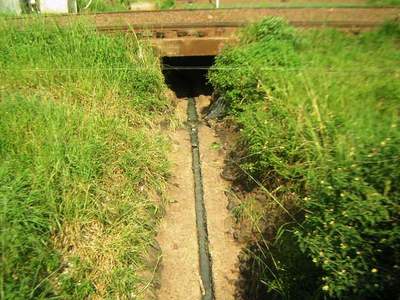