Sandwatch featured at “Rio+20 the future we want” event, June 20-22, 2012
At the Rio+20 Conference, world leaders, along with thousands of participants from governments, the private sector, NGOs and other groups, came together to shape how we can reduce poverty, advance social equity and ensure environmental protection on an ever more crowded planet to get to the future we want.
The United Nations Conference on Sustainable Development took place in Brazil on 20-22 June 2012 to mark the 20th anniversary of the 1992 United Nations Conference on Environment and Development held in Rio de Janeiro, and the 10th anniversary of the 2002 World Summit on Sustainable Development in Johannesburg.
The Conference focused on two themes: (a) a green economy in the context of sustainable development and poverty eradication; and (b) the institutional framework for sustainable development. The preparations for Rio+20 highlighted seven areas which need priority attention; these include decent jobs, energy, sustainable cities, food security and sustainable agriculture, water, oceans and disaster readiness. 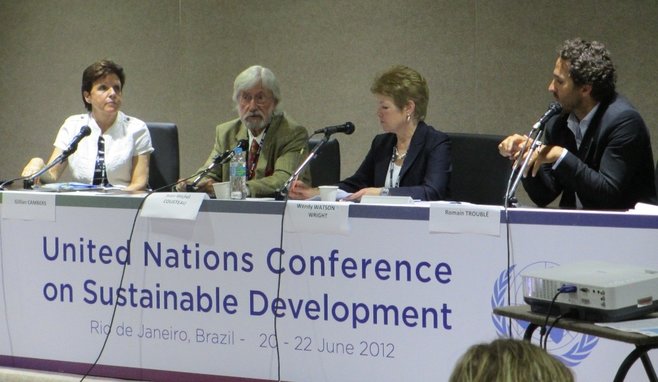 From left to right: Gillian Cambers, Sandwatch Foundation; Jean-Michel Cousteau, Ocean Futures Society; Wendy Watson-Wright, Intergovernmental Oceanographic Commission; Romain Troublé, Tara Oceans.
​
​Gillian Cambers, in her presentation, focused on Sandwatch’s contribution to (a) volunteerism and ocean stewardship, (b) science and learning, (c) education for sustainable development, and (d) making science fun for students. She also expressed acknowledgement and thanks to key organisations that have supported Sandwatch and helped it become a worldwide programme, in particular UNESCO through its sectors for science, education and communications; its national commissions; and its networks such as the Associated Schools Project Network and the Intergovernmental Oceanographic Commission. The assistance of the Government of Denmark, the University of Puerto Rico Sea Grant College Program and many other organisations was also recognised.